Doctor Ben Carson, eminent neurosurgeon and author, speaks eloquently and suggests remedies for the progressive malaise afflicting America.  He is unlikely to demean his reputation, or the dignity of any office he holds, by granting interviews to coarse, pop-culture celebrities.

Brave and Honest Are Hard to Find

One day following President Obama’s sixth State of the Union address, Speaker of the House John Boehner invited Israel’s prime minister, Benjamin Netanyahu, to speak before a joint session of Congress. Netanyahu’s appearance on Congressional Hill is warmly anticipated, as six years have passed since a brave and honest leader spoke from the House lectern.  Netanyahu is expected to fill a remarkable void in Obama’s lecture of the other night: the spreading threat posed by radical Muslim terrorists.

New England quarterback Tom Brady and Coach Bill Belichick both claim they knew nothing about the deflation imbroglio until hearing the news Monday morning.  That’s the same response Obama gives when asked about various crises burdening America.  Are the Patriots getting guidance from the White House, making them America’s Team? 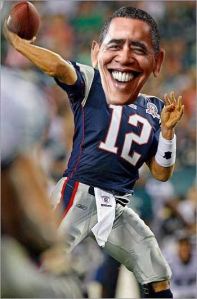 High School by Another Name

In a new scheme to pile debt on future Americans, President Obama proposes giving students free education at community college. For two years following 12th grade, this addition to his spending binge has young adults staying in the classroom to study English, learn rudimentary math, understand American history, and develop life skills useful in the workplace. In other words, they will attend what used to be known as high school.

Turned frantic by unexpected news, the entire White House staff resorted to hiding televisions from the president. Screens all across Washington beamed footage directly from the streets of Paris: arms linked, world leaders set the pace for millions marching against Islamic terrorism.

“Look,” complained one aid. “Even that coward Netanyahu is there.”

Another covered her eyes. “All the world’s leaders showed up.”

“What do we tell Barack? Was he invited, even?”

“Apparently not. This is a rally for the quaint, old-fashioned sort of leader who is out front.  They’re all jealous of our omniscient who leads from behind.”

“But he’s more popular on YouTube than Merkel and Hollande combined!”

“An outrage,” agreed the second aid. “This calls for a meeting or something.”

Three days passed. The Secretary of State gaveled a wood-paneled conference room to order. “Gentlemen,” he started. “We are highly embarrassed. Perhaps the president’s invitation was lost in the mail. How should we make amends and show France we also sympathize?”

“Dude, how about sharing a song with them?” suggested one up-and-coming diplomat.

In the hallway moments later, one of Foggy Bottom’s grizzled veterans scoffed at the notion. “Sing to another country? That’s the lamest approach to diplomacy I ever heard. It will never fly.”

The Secretary of State, after two more days, gazed proudly on as American singer James Taylor crooned You’ve Got a Friend to the French people. From Brest to Nice, dismayed laughter was heard in the streets: a once-great country, whose liberating army had marched through the Arc de Triomphe, was now enfeebled to the depth that it responds to terrorism with a song.